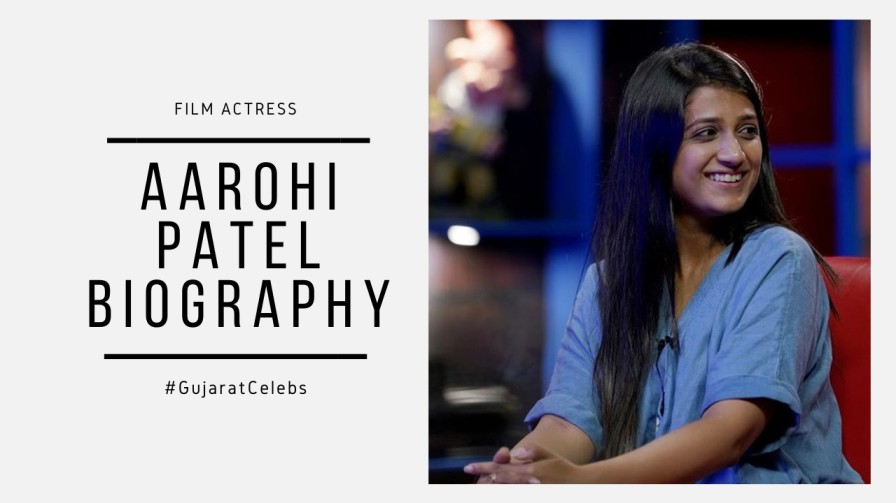 Aarohi Patel stands among the most charming and popular Gujarati actress. She is a popular face in the Gujarati film industry. From being a child artist to winning the award for the Best Actress category in 2017, Aarohi has come a long way. The talented actor has achieved an impressive fan base throughout the state. Let’s Read more into Aarohi Patel biography.

Aarohi was born in one of the star families of Gujarat in 1994. Her parents, Sandeep and Aarti Patel are renowned directors and producers of the Gujarati film industry. Along with being an amazing actor, Aarohi has been a meritorious student throughout her childhood. Her acting debut was done when she was only a child. As a child artist, she had appeared for the first time in the movie Moti Na Chowk Re Sapna Ma Ditha in 1999.

She studied for Bachelors in Commerce with a specialization in Accounts at H. L. Institute of Commerce, under Ahmedabad University. She has also pursued a Master’s degree in Development Communication from Gujarat University.

While completing her degrees, Aarohi participated in various dance competitions and theatre. She has won many of those. Her first movie in a lead role was bagged in 2015 in the movie Premji: Rise of a Warrior.

Aarohi Patel is known for her awesome screen presence and brilliant acting. From her very childhood, she has been winning hearts. After her debut movie Moti Na Chowk Re Sapna Ma Ditha, she worked in SAB TV’s Sati Savitri in 2001. She acted as the main character in the television show. Later, she kept herself busy in studies and continued acting in theatres.

In 2015, a grown-up Aarohi made her acting debut as a lead character in the movie Premji: Rise of a Warrior. The movie was directed by renowned filmmaker Vijaygiri Bava. Later, in 2017 her next movie Love Ni Bhavai got released. She played the role of Antara, which earned a lot of praise. The Sandeep Patel film was a romantic drama. It became a bit hit.

Aarohi appeared in the movie Chaal Jeevi Laiye! in 2019, co-starring with Siddharth Randeria and Yash Soni. The movie became a blockbuster. With a collection of Rs. 52 Crores, the Vipul Mehta movie became the highest-earning Gujarati film. Aarohi’s performance gained appreciation by movie critics.

In the same year, she has starred in Montu Ni Bittu as Bittu. The movie was directed by Vijaygiri Bava. Aarohi acted opposite Maulik Nayak. The movie got many critical appreciations.

Aarohi Patel has earned her place in the Gujarati film industry with a lot of hard work. Her acting career has gained her numerous fans and a lot of fame. Her acting performance has made the audiences love her. She inspires a lot of struggling actors with her compassionate and attractive personality. If you would like to read more about famous celebs and amazing personalities, keep scrolling.

An exclusive interview of Gujarat celebs with Parikshit Tamaliya