Abhishek Jain Biography: Gujarat has gifted a couple of fresh talents who have to enlighten not only the Dhollywood industry but the Bollywood also with their sparks. In these young brigades, youngster Abhishek Jain plays a major role in directing and producing both. This Gujarati director has achieved enormous success in his field and secured a position in the industry with his efficiency and fondness for the big screen.

Abhishek was born in Ahmedabad, Gujarat on 3rd August 1986. He belongs to the family of Marwari Jain. After his schooling, he got himself enrolled in B.K.Majumder Institute of Business Administration which is now a part of the Ahmedabad University, for BBA course. He had an immense interest in films and especially in the mechanism behind the silver screen that he decided to pursue his career in the film industry and took a degree course in film making from Whistling Woods.

Abhishek first set his journey as a director by assisting eminent director Sanjay Leela Banshali in his film Saawariya and next  Subhas Ghai, in his film Yuuvraj. Returning to his hometown, Ahmedabad, Jain worked in Radio Mirchi as a Radio Jockey. Ahmedabad International Film Festival,2010 eventually turned out to be a blessing in Abhishek’s career as he met there Mikhil Musale and Anik Shah and founded his production named Cineman Production, co-founded by Mikhil Musale. 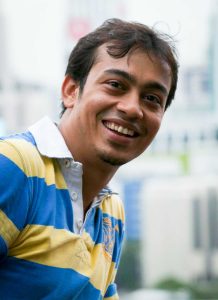 Abhishek first debuted as a director with his Gujarati film, Kevi Rite Jaish which lead him to the way of eternal fame and success. That he had been awarded Trend Setter Award by the Gujarati Innovation Society.

Followed by his success, he directed his second movie Bey Yaar which eventually got commercially successful and praised by cine critiques. In 2016, Jain declared the news of co-producing three Gujarati films with Phantom Films. Under the joint banner of Phantom Films and Cineman productions the first movie that had released, is Wrong Side Raju, directed by co-founder of Cineman Production, Mikhil Musale. Again this movie at the 64th National Film Awards bagged the prestigious award of National Film Award for Best Feature Film in Gujarati.

This young brilliant personality also managed to write down his own experiences of making his two urban Gujarati films in a book named Aa To Just Vaat Chhe and published in June 2015.

In April 2019, Abhishek announced to direct the Hindi remake of the blockbuster Kannada movie Kirik Party but left the project finally due to some unknown reason.

Summing Up with Abhishek Jain Biography

And now finally he is on board with his upcoming Bollywood movie project  Hum Do Humare Do, which will feature a bunch of talented actors like Kriti Sanon, Rajkumar Rao, and Ratna Pathak Shah, in 2021.

With time we hope to gift us many more exquisite movies.  For now, We wish this extraordinary persona a bunch of success in his film career journey.

I have experience of 6 years in a content writing of many talents, whether it's providing a long-term blog or articles content, social media, biography, or writing website/advertising copy. My attention to detail is excellent and on-time work and my grammar and vocabulary are impeccable. I particularly enjoy jobs that require a high level of accuracy and focus, as well as jobs that allow me to use my writing skills to their full extent. I have written about dozens of topics and am a quick learner on new areas of focus.
Previous Jahnvi Shrimankar Biography | Age | Early career | Husband | Songs
Next INDIA’S MAGNIFICENT WINS IN 2020 TOKYO PARALYMPICS: KNOW ABOUT THE FINEST ATHLETES OF THE COUNTRY