An exclusive interview of Gujarat celebs with Parikshit Tamaliya

When it comes to talking about stars and many fresh faces in the Hindi cinema and television industry, Gujarat has an enormous involvement in this. Today we will know about the journey of Gujarati actor & Exclusive interview with Parikshit Tamaliya a.k.a. Pexy 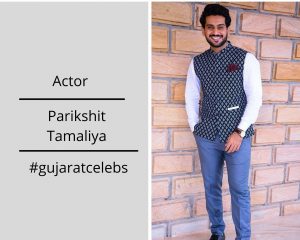 Parikshit is an actor who not only focuses on the silver screen, rather he loves to experiment with poles apart characters in different genres. He is also very passionate about theatre plays.

Now, let’s have a glance at some lesser-known facts about Parikshit.

What Was His Childhood & Education Like? Let’s Know It from Parikshit Himself…

His father is a renowned advocate, Rameshbhai Tamaliya. Mansi Tamalia and Krish Tamalia, Deval Tamalia Vora are two sisters of Parikshit. When asked about his early days he says, “I was born in Surendranagar, Gujrat. I finished my primary education at Sunny Sky School and moved to Ahmedabad when I was at 9th standard and enrolled at Gujarat Hiramani Higher Secondary School. A big reason for moving to a new city was my love and passion for Cricket. Later I got myself enrolled in the S.M. Patel Institute of Commerce in Ahmedabad for pursuing a Bachelor of Commerce. During that time I started taking parts in various plays and theatres.”

The twenty-five years old dashing and very handsome actor has revealed that he has always wished to be a Cricketer. During his interview with Gujarat Celebs, he has mentioned. “I am still very passionate about the sport. Even now if I get that kind of opportunity I would gladly go for it! But I know that’s not possible anymore.”

Parikshit Tamalia first starred in the Gujarati film Duniyadari directed by Shital Shah where he played the role opposite Esha Kansara. Tamalia was praised heartily for his acting. The actor has skillfully showcased his talent not only in movies but also on other platforms.

See what the man himself has to say…

How Long Have You Been Acting?

I started my theatre journey in 2014. I faced the camera for the very first time in 2016 when the shoot of my debut film Duniyadari began. So, it’s around seven years since I am working as an actor.

Who Inspired You the Most to Come to This Field?

Well, when I started acting I didn’t have much idea about all this. Even I wasn’t sure if I wanted to be a professional actor. However, my father used to act in theatres and my mom used to sing; so I had always been inspired by them. Watching them performing on stage made me want to see myself there at the stage. I was like whatever I do it would be somewhere like that! Moreover, I used to watch a lot of films since childhood and it made me connect to what I do now. Maybe I don’t idolize any certain person but yeah, I met various people while walking this path and have been inspired by many along the way.

Which Film or What Phase Do You Think Is Your Career Highlight?

I worked in the film Satam Aatham written by Neeraj Pandey and Shital Shah was the director. He was the same man who made awesome films like Naam Shabana, Special 26. So, after it was premiered I received lots of loved and praise. It had been a great feeling. Even though the film has not been released yet, I’m sure whenever it comes into the theatre you will love it. I think this is a highlight for my film journey.

About my theatre career, I will say that I received the Best Actor award for back to back two years in the INT; which is very prestigious. I look at these two years as the most glorious part of my theatre journey.

And What Are Your Achievements So Far in your Acting Period?

(Laughs) I have much more to achieve. I look at others and get inspired to work more and give my best to achieve. I don’t think I have yet reached that part where I can talk about my achievements.

What Has Been The Most Exceptional Part of Threatre?

Ghemar Ni Gita is very special to me. It was directed by my Guru and I won INT because of this one. And Ashwatthama has been very challenging for me and that’s why it is very close to my heart. Then I enjoyed doing Satam Aatham very much.

First stands Satam Aatham as I said. Another one by Chandresh Bhatt is also ready to release. We have Amit Trivedi’s music there. I’m starting shooting for a movie directed by Anish Shah. Brilliant actors like Arjav Trivedi, Aarohi Patel are also working in it. I’ve already begun preparing for it.

How Do You Handle Difficult Situations?

I won’t say I had to struggle too much because I earned what I wanted or deserved. But my transformation to gain fitness during my college days have been a very tough phase. I put on a lot of weight at that time and I had just begun doing theatres. Reducing that and maintaining fitness till now has been hard. But I am maintaining strictly even now and I’m kind of addicted to fitness.

What Message Do You Have for the GenZ?

Today’s generation wants lots of things within a very less time. I believe you have to work for it as hard work and luck both play a very important role in life. Taking shortcuts and going for things thinking I will succeed easily never work. Patience is the key. And never let ego come in between while working as you may have to work for and under various kinds of people. Letting ego play will only affect your career. Keep learning and work hard and you will receive everything you wish for.

What Do You Feel about the Industry Growing Every day?

It feels great to be a part of this big industry. Regional films are doing really well and getting a place on the national platform which is great. I believe content is king and we are all the players. And Gujarati Industry is going places and will continue doing so. Even multiple media houses like Gujarat Celebs are supporting us. So it helps with progression. If things go on like this I’m pretty sure the industry will grow much more.

First of all many many congratulations on the way you work. Keep reaching actors and rising artists as this will help many get a platform to grow. We need media houses like you the most.

Not just the silver screen, Tamalia has acted in so many web series and short films that were released on YouTube. Some of such short films and web series are — COAT, a short film where he shared the screen with the legendary actor Dharmendra Gohil, Con Ho Tum. Besides playing in theatre, this young actor has endorsed so many popular brands. Tamalia has also taken part in the chat shows where he shared his interests and love towards acting and the film industry. Also, when it comes to music be it for listening or acting in music videos, Parikshit is always willing to do that. He has been seen in music videos like ‘Chandni Raat Maa’ and ‘Bhuli Javu Chhe’.

This young talent is active on his Instagram handle where he shares his daily glimpse of personal life and his works with his followers. The fans who are always keeping an eye on their much-loved actor and are keen to know more about him, here is big news for them. Parikshit Tamalia recently on 25th July 2021 got hitched with his alleged girlfriend Freya Ghedia. With time we expect to be entertained by Tamalia more and more with his extraordinary acting expertise.

Above is the Exclusive Parikshit Tamalia Interview, hope you enjoyed it.

I have experience of 6 years in a content writing of many talents, whether it's providing a long-term blog or articles content, social media, biography, or writing website/advertising copy. My attention to detail is excellent and on-time work and my grammar and vocabulary are impeccable. I particularly enjoy jobs that require a high level of accuracy and focus, as well as jobs that allow me to use my writing skills to their full extent. I have written about dozens of topics and am a quick learner on new areas of focus.
Previous Bhavin Bhanushali Biography | Age | Family | Girl Friend | Songs
Next BHAVINA PATEL CREATES HISTORY BY SECURING MEDAL IN THE TOKYO PARALYMPICS 2020