Youngsters who made their way to the silver screen through their acting proficiency and became an apple of every audience in so little period, Gujarati star Bhavin Bhanushali, often called the chocolate boy by his fans, for his adorable nature and endearing countenance is an example among them. 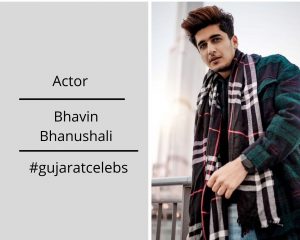 From  Starting his career by taking up some modeling projects to becoming successful at making his entry to the Bollywood industry….let’s be a part of Bhavin’s personal to a professional life journey.

If you are interested to take a sneak at the life of many more Gujarati actors, go to www.gujaraticelebs.com

Bhavin was born in Mumbai, Maharashtra on 24th August 1997. This 24 year old (as of 2021) young actor belongs to a Gujarati Hindu family. His father Prem Bhanushali is a businessman by profession. His mother’s name is Asmita Bhanushali and he has a sister named Akshita Bhanushali.

Bhanushali finished his early schooling at St. Xavier’s school, Mira Road in Mumbai. Later he got himself enrolled for graduation in Mithibai College, Mumbai, and Thakur College of Science and Commerce in Mumbai.

Bhavin was always fond of dancing, singing, and acting from his childhood, and for this reason, he took part in dancing and acting competitions that were held in his school and college. After his graduation, he decided to focus fully on his acting career and made himself eligible through his diligence and skill in acting.

Bhavin got his first project in the popular television drama ‘Dil Dosti Dance’, in 2015. There his brilliant performance helped him to grab the attention of several endorsement companies and TV personalities. From that time he started to endorse popular commercial brands like  Vodafone and Dairy Milk and Medimix.

In Star Plus’s television serial ‘Tamanna’, it’s the role of ‘Baseer Khan’, that changed Bhavin’s career and took him in the way of continual success. He got fame and recognition in Indian television and especially in the Bollywood industry during his serial ‘Chidiya Ghar’, where he played ‘Gillu’ a.k.a. ‘Gillendra Ghotak Narayan’. Bhavin debuted in the web series with the ‘Babbar Ka Tabbar’. And in 2019 he first got the opportunity to slay his first Bollywood movie role as ‘Ishaan Mehta’, as the son of Ajay Devgan in the blockbuster movie ‘De De Pyar de’ which also had cast Tabu and Rakul Preet Singh.

Bhanushali also participated in MTV’s famous reality show Splitsvilla, season 12. This youngster is not only a favorite in the television and cinema industry but also he made his way through musical platforms like‘ Musical’ and ‘Tik Tok’ where he has millions of followers.

Besides, Bhavin also starred in a Gujarati music album ‘Pesa Chhe to Prem Chhe’. He has a youtube channel named ‘Teen Tagada’, where he regularly posted videos along with his friends Sameeksha Sud and Vishal Pandey & their youtube channel also will be soon hitting the milestone of 1 million subscribers as well.

Some lesser-known facts about Bhavin:

We wish this youngster all success in his acting career.

I have experience of 6 years in a content writing of many talents, whether it's providing a long-term blog or articles content, social media, biography, or writing website/advertising copy. My attention to detail is excellent and on-time work and my grammar and vocabulary are impeccable. I particularly enjoy jobs that require a high level of accuracy and focus, as well as jobs that allow me to use my writing skills to their full extent. I have written about dozens of topics and am a quick learner on new areas of focus.
Previous Mayur Chauhan Biography | Age | Movies | Personal Life | News
Next An exclusive interview of Gujarat celebs with Parikshit Tamaliya