Meet the sensational filmmaker Dhwani Gautam. The writer-director has been on the topic of talk for a few years now. Gautam has managed to impress the audience with his works time and again. 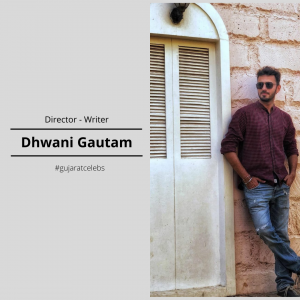 While his biggest hit has been Romance Complicated released in 2016, Dhwani Gautam has mesmerized cinema lovers with his latest film Kesariya. Moreover, he possesses amazing skills in film editing, screenwriting, editing, advertising, and creative direction. The multitalented figure Gautam has been contributing to the Gujarati film industry for so many years.

Born on 22nd July 1985, in New Delhi, Dhwani Gautam has always dreamt of following his passion. He was raised in a middle-class family in his birthplace Delhi. He has done B.Com in Accountancy at Gujarat University. Upon completion of his studies at the Asian School of Media Studies, Noida, Dhwani went on to pursue his dreams.

He has worked in small jobs before becoming an RJ for a while. After moving to Mumbai, he worked as an assistant director for several serials including the family drama Baa Bahoo Aur Baby.

In 2007 Dhwani worked in the movie Nanhe Jaisalmer that had Bobby Deol as the lead. In the same year, he assisted for Hats Off Productions. Later on, he worked in Sunny Deol starrer film Heroes in 2008. He had also gained more experience from Sagar Arts Vadodara in the same year. After working in several dramas and movies as an assistant director and writer, he proceeded to work in the Punjabi film industry.

In between doing all these, Dhwani became the leading head of ONE Advertising & Communication Services Ltd where he worked from 2009 to 2013. He has also been the Creative Head for Care World Chanel and Sahara Motion Group.

Dhwani Gautam has recently been seen as a part of the Punjabi music video starring Shama Sikander and Gaurav Bajaj. The romantic video has been winning hearts for some time now. Dhwani’s charming personality and brilliant works have impressed numerous audiences. His amazing directorial and screenplays have already proved his hardworking nature and talented person.

I have experience of 6 years in a content writing of many talents, whether it's providing a long-term blog or articles content, social media, biography, or writing website/advertising copy. My attention to detail is excellent and on-time work and my grammar and vocabulary are impeccable. I particularly enjoy jobs that require a high level of accuracy and focus, as well as jobs that allow me to use my writing skills to their full extent. I have written about dozens of topics and am a quick learner on new areas of focus.
Previous Sahiba Arora : An Exclusive Interview with Bespoke Fashion Designer Sahiba Arora
Next LET’S HAVE A LOOK AT THE ADMIRABLE AND RECORD-FILLED JOURNEY OF PRIYANK PANCHAL, THE SHINING STAR CRICKETER IN GUJARATCRICKET TEAM