Esha Kansara Biography: Astounding beauty and elegance have always been played a major role in the Bollywood Industry. For decades it is the dazzling aura of the actresses that sets a cite of magnificence to a poles apart level to the whole world. 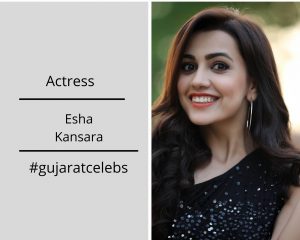 The actresses who with their acting skills and Godly exquisiteness enlightened the Hindi cinema and television industry, Esha Kansara secures her position pompously.

Esha Kansara is a remarkable Gujarati actress in the Hindi cinema and television industry who happens to be a famous model and dancer too. This beauty made her debut in 2011 with popular Indian t.v. serial ‘Mukti Bandhan’. Star plus’s approaching serial ‘Zindagi Mere Ghar Ana’ will be starring Esha in the female lead role of ‘Amrita‘.

Kansara was born on August 20, 1992, to Ramesh Kansara and brought up in Ahmedabad, Gujrat. She is a trained classical Bharatnatyam dancer. After finishing her schooling at the Hiramani school located in Ahmedabad, Esha headed for Mumbai to fire up her profession as an actor.

She studied commerce at Mithibai college in Mumbai. Esha also participated in the Miss Gujrat beauty pageant in the year 2009 and secured her place as second runner-up. In the next year 2010, she took part in the renowned dance show ‘Dance India Dance’, and showcasing her talent she became one of the top 100 finalists in India.

Kansara said there are so few opportunities for newcomers in Dhollywood ( Gujarati film industry) so she decided to try her luck in Mumbai. And rest is history as her luminous career graph proves her eligibility as an actor in every possible way. Esha first bagged her role of Devki shah in 2011 in the famous television drama ‘Mukti Bandhan’. In addition to that, she also participated in the cooking show named ‘Kitchen Champion 4’. After playing the role of Devki, in 2013-14, star plus’s another serial named ‘Ek nanad ki khushiyon ki chaabi…meri bhabi’ she played as ‘kittu’ a.k.a. Kritika Anand Shergill where she got praised and soon because of the dear nature in her played character became an apple of eyes of every audience.

In the year 2017, Esha Kansara debuted in her first Gujarati film, ‘Duniyadari’ as ‘Kavita Zaveri’, directed by Shital shah.

Within 2018-19 Esha was starred in four Gujarati films. In 2018, in  Tapan Vayas’s film ‘Mijaaj‘ she played the role of ‘Jahnvi’. Her played a role as ‘Esha’ in ‘Midnights with Menka’, directed by Viral Shah and Chandresh Bhatt’s film ‘Untitled Project’ her played character ‘Riya’ made her place secured in filming industry.

Esha with her outstanding beauty and brilliance was nominated as Ahmedabad Times Most Desirable Woman on TV.  Kansara was cast as ‘Radha’ in the opposite of actor Shreyas Talpade in SAB TV’S television drama ‘My Name Ijj Lakhan’ in 2019. She also played the cameo role of ‘Misri Pandey’ in ‘Maddam Sir’. Esha with her fellow actress Deeksha Joshi hosted a web series named ‘Ben Talk’ on youtube.

Esha is still unmarried and the existing news is saying this damsel is living a single life so far. She has huge followers on her Instagram where she shares a glimpse of her social and personal life with the netizens and influences millions of followers with her style statement and fitness routine. Esha is all set to cast her spell once again in the role of ‘AMRITA‘ in star plus’s forthcoming serial ‘Zindagi Mere Ghar Ana’ in a whole new avatar.

I have experience of 6 years in a content writing of many talents, whether it's providing a long-term blog or articles content, social media, biography, or writing website/advertising copy. My attention to detail is excellent and on-time work and my grammar and vocabulary are impeccable. I particularly enjoy jobs that require a high level of accuracy and focus, as well as jobs that allow me to use my writing skills to their full extent. I have written about dozens of topics and am a quick learner on new areas of focus.
Previous Freddy Daruwala Biography | Model | Actor | early life | Career| Relationship
Next Mayur Chauhan Biography | Age | Movies | Personal Life | News