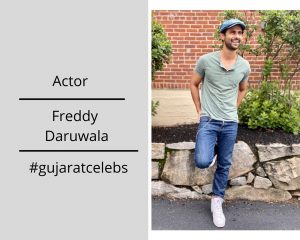 Freddy Daruwala Biography: Freddy Daruwala is a well-known name in the Bollywood industry. He got recognized by everyone after he shared the screen with Akshay Kumar in the film Holiday: A Soldier Is Never Off Duty. Freddy started his career as a model though.

Let’s witness the journey of Freddy Daruwala belonging to a simple family to become a model and then an actor in the Bollywood industry.

Freddy’s real name is Farhad Daruwala who was born in Surat, Gujarat on 12th May 1984. Daruwala belongs to a middle-class half Parsi and half Gujarati family. He finished his schooling at Saint Xavier’s High School. Later Freddy graduated from Veer Narmad South Gujarat University.

He is an MBA Degree holder as well.  Freddy had tied his knot with Crystal Variava who happens to be a doctor and they are parents of two sons, currently residing in Mumbai.

Freddy Daruwala commenced his journey as a model. He has participated in Hayward’s Mr. India 2007 and became the first runner-up. Then he started modeling for the eminent Fashion Designer Manish Malhotra, and he is one of the favorite models of Manish.

Daruwala also endorsed reputed commercial brands like Raymonds, Nivea, Tic-Tac, Reliance, and many others from time to time.

Freddy Daruwala made his big-screen debut in 2011 with the movie Mummy Punjabi. Freddy has starred in more than 12 films in various languages like Telegu, Hindi, and Gujarati. He also bagged the Ahmedabad Times Most Desirable Man two times in 2018 and 2020.

It is the role of the Head of Sleeper’s Cells in the movie Holiday, where Freddy got fame and recognition.

After successful role-playing in the film Holiday, he played various characters in several films. Some notable characters and the films of Daruwala’s are…

In the Gujarati movie Suryansh, in the role of Karan Rana and the role of Rana Vijay in Race 3. Freddy won the GIFA2018 awards for his excellent acting in Gujarati films.

Daruwala was last seen in his debut web series of ZEE 5’s Poison in 2019, in the role of DSP Vikram.

Currently, he is busy with his upcoming projects in Bollywood. We wish this phenomenal (Freddy Daruwala Biography) persona a bunch of success in his future journey as an actor.

I have experience of 6 years in a content writing of many talents, whether it's providing a long-term blog or articles content, social media, biography, or writing website/advertising copy. My attention to detail is excellent and on-time work and my grammar and vocabulary are impeccable. I particularly enjoy jobs that require a high level of accuracy and focus, as well as jobs that allow me to use my writing skills to their full extent. I have written about dozens of topics and am a quick learner on new areas of focus.
Previous Parthiv Gohil Biography | Early Life | Age | Wife | Songs
Next Esha Kansara Biography | Age | Movies | Husband | Serials | Family