Gir National Park is situated in the peninsula of the state of Gujarat, South-West of India. Gujarat’s wildlife sanctuary is located about 37 miles which are 60 km south-southwest of Junagadh in a rocky region of dry scrubland. It is located 43 km North-East of Somnath. It covers an area of about 500 square miles which is 1,295 square km.

It is the only home for Tigers, and there are more than 300 tigers in the Gir National Park. The place is filled with short hills and the vegetation there is mixed deciduous, with stands of Teak, Acacia, Jamun, Tendu, and Dhak trees, and large patches of grasslands are spread all over. On the hills, the trees are very scanty and daze.

In the 19th century, the rulers of Indian princely states like Hyderabad, Baroda used to invite the British officials for hunting. Till the end of the 19th century, only a few Asiatic lions were left in India, and all of them were in the Gir Forest. It was a part of the Nawab of Junagarh’s private hunting grounds. There is a drastic decline in the population of lions, so the British viceroys brought such a change & by taking initiative, So the Nawab of Junagadh established the sanctuary.

Nowadays, it is the only area in Asia where Asiatic lions are found and are considered one of the most important and protected areas in Asia because of their biodiversity including Flora and Fauna. It is now considered as one of the jewels of Gujarat’s ecological resources. It has more than 400 plant species, 38 species of mammals,300 species of birds, and 37 species of Reptiles. The Gir forest & National park or wildlife sanctuary, (it is also known as Sasan Gir), is a forest with sanctuary.

The Seven perennial rivers which surround Gir are the Hiran, the Shetrunji, the Godavari, the Raval, the Shinoda, the Datardi, and the Machhundri. The place is a very useful place for research and biology. From the forest 12 lakh 30 thousand metric tons of wood per year. In the forest, there are many Teak trees, which are mainly placed in the East portion of the forest.

Many other big trees like the Banyan, Jamun, Ber are found there which also help in the moisture content of the region and also holds the soil and prevents it from soil erosion.  And also, small plants like Amli, Saras, Tendu can also be seen here. The forest supplies with 5 kilos of Grass for the annual harvest. 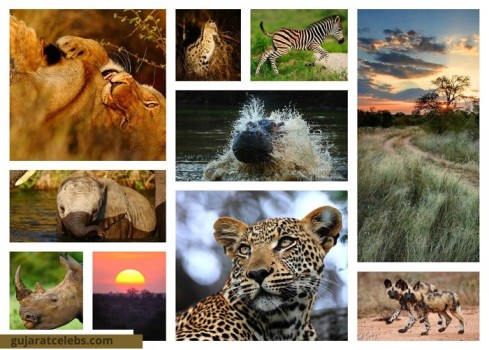 ⭐ Herbivores group – It consists of the chital, nilgai, sambar, four-horned antelope, chinkara, and wild boar. Blackbucks from the surrounding area are sometimes seen in the wildlife sanctuary among the smaller mammals like, the porcupine and hare are more common, but the pangolin is very less.

⭐ Reptiles – It includes the various reptiles like mugger crocodile, Indian cobra, tortoise, and monitor lizard which inhabit the water bodies of the wildlife sanctuary. Snakes are found in the bush and forest. Pythons are also seen sometimes at the banks of the water bodies. In the year1977, the Gujarat State Forest Department used Gir National forest to form the first Indian Crocodile Conservation Project and released nearly about 1000 marsh crocodiles into Lake of Kamaleshwar and other nearby small water bodies in and around Gir.

⭐ Birds group – It has more than 300 species of birds, most of which are residents. The scavenger group of birds has 6 varieties of vultures. Some species like the crested serpent eagle or the Bonelli’s eagle (which is now an endangered species), then the changeable hawk-eagle, brown fish owl, an eagle-owl, the Brown-capped pygmy woodpecker, the black-headed oriole, Indian peafowl, the Crested treeswift, Rock bush-quail, and Indian pitta are only found in Gir. Recently the Indian grey hornbill was also found.

Gir National Park remains closed from 16 June to 15 October every year. The most favorable time to visit the Park is between the month of December and March. Though it is very hot in April and May, these are the best months for wildlife viewing and photography.

Gir National park the best place for holidays in winter and monsoon season with beautiful views and beautiful beasts. Summers r very hot in the area, a very budget-friendly destination. Locals r very helpfully. Connected with the national highway. It’s well organized and one of the best safari in India.

I have experience of 6 years in a content writing of many talents, whether it's providing a long-term blog or articles content, social media, biography, or writing website/advertising copy. My attention to detail is excellent and on-time work and my grammar and vocabulary are impeccable. I particularly enjoy jobs that require a high level of accuracy and focus, as well as jobs that allow me to use my writing skills to their full extent. I have written about dozens of topics and am a quick learner on new areas of focus.
Previous Paresh Rawal Biography | Wife | Age | Movie | Career
Next Manoj Joshi Biography | Personal Life | Journey | Movies | Career