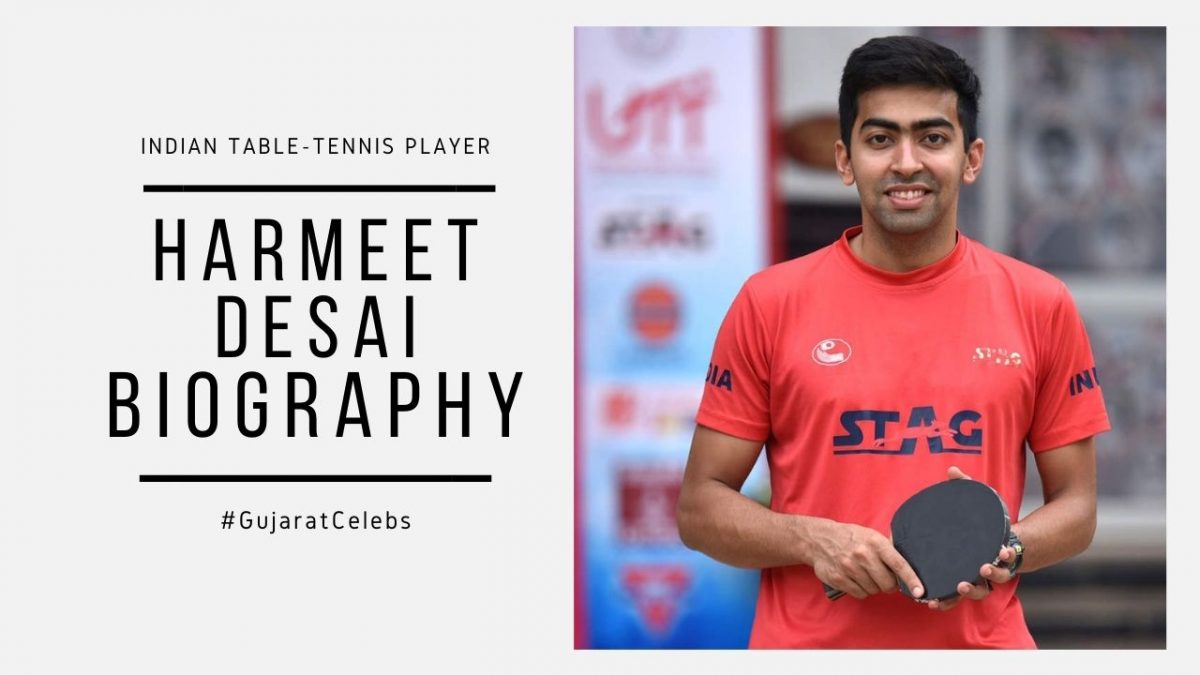 In a cricket-loving nation, Harmeet Desai opted for his career in Table tennis a sport that has recently picked up in India. Harmeet Desai is an Indian T.T player from Surat. He won gold in the men’s team event at the commonwealth games, 2018 held on the Gold coast in Australia and bronze in the men’s doubles event with Sanil Shetty. Harmeet Desai won the men’s singles title at the Commonwealth Table tennis championship 2019 at Cuttack, India in a hard-fought final againstSathiyan Gnanasekaran to claim the Men’s singles title. He has been honored with the Arjuna award by the Ministry of Youth Affairs and Sports, Government of India in 2019. Check here Harmeet Desai Biography and More.

At the age of only 6 years, he arrived on the Gujrat Table tennis circuit.  He used to astonish everyone with his skills and brilliant sense in judging the spin on the ball something that is of paramount importance at that tender age. He had worked tirelessly in order to look like a complete natural at the sport. His glory started to spread across the state of Gujrat and later burst onto the national scene.

With his right-handed offensive playing style, he has been able to add many feathers to his cap, winning medals at the national as well as international level. Later on, he got a chance to polish his skills and learn new skills under the coaching of Peter Karlsson under the Olympic solidarity program. At present Harmeet is counted amongst the top-ranked TT players in India and practicing hard to for his dream to clinch an Olympic gold medal for the nation.

Harmeet Desai won gold in the Men’s singles and a bronze medal in Men’s doubles at the commonwealth games 2018 that were held at Gold coast, in Australia. He was awarded the prestigious Arjuna award by the hands of  President of India Ram Nath Kovind in August 2019 for his outstanding performance.

He won the ITTF Indonesian open tournament in November 2019. This was a historic moment as he was the first Indian to win an IITF tournament in the Asian continent. Harmeet Desai created history in January 2020  by being the first player from the state of Gujarat to win the National Champion title in table tennis.

He was a member of the Indian junior team that created history by winning the Junior Championship. He also won the bronze medal in the 2018 Asian games held in the city of Jakarta. Harmeet has won several accolades at the national and international levels. His passion for playing the sport for his nation and an ever-growing hunger for success in this sport is unfathomable. He earned a bronze medal with his team at the Asian Junior Table Tennis Championship 2011 in Bangkok.

He bagged an individual gold medal at the Lusofonia games of 2014 held in Goa. The same year he became the first Indian to reach the Qatar open world tour platinum series final held in Doha. Harmeet Desai won the U-21 of Brazil open 2012 and became the second Indian table tennis player to earn the award after Sharath Kamal.

Harmeet Desai aims to win a medal in the commonwealth games and Asian games in the future. He has been an inspiration for all young table tennis players in his country. For them, he has an inspiring message to deliver. He says everyone to follow one’s heart and passion. One must work tirelessly towards the goal.

Harmeet is ranked 72nd position in the world in table tennis.