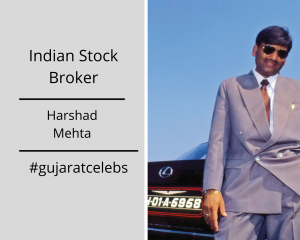 Harshad Mehta, one of the most talked-about names of the 1990s, was not only a sharp businessman but also mastered manipulation at his fingertips. Within a few years, he reached the sky, and then, he crashed just as badly! His life and journey from childhood to becoming the man with twenty-seven criminal charges is worth knowing.

So, let’s see what we have on the infamous Harshad Mehta Biography & his scam 1992 –

Date of Birth of Harshad Mehta:

What is Harshad Mehta’s Birthplace?

What is the cast of Harshad Mehta?

Where did Harshad Mehta Grow Up?

Harshad Mehta spent his childhood in Borivali where his father’s textile business was based.

What is Harshad Mehta’s Educational Qualification?

Harshad Mehta finished his schooling at Janta Public School at Camp 2 Bhilai. Then, he moved to Mumbai to study B. Com at Lala Lajpatrai College.

What Jobs Did Harshad Mehta Do Before Getting into the Stock Markets?

After graduation in 1976, Harshad Mehta dwelled in many jobs such as selling cement, hosiery, and cataloging diamonds for the next eight years. He also worked as a sales employee in the New India Assurance Company Limited (NIACL). During this period Harshad Mehta got interested in the stock market and finally quit his job to enter the ‘profiting’ market!

When did Harshad Mehta Come to the Limelight?

By 1990, Harshad Mehta settled his position in the Indian securities industry through working in several brokerage firms. He actively began trading in 1986 when numerous renowned companies started investing in his firm. And he kept on growing as an exceptional broker. Popular media houses began bringing him under the spotlight. Business Today even called Harshad Mehta the ‘Amitabh Bachchan of the Stock Market.’

Why is Harshad Mehta Called ‘The Big Bull’?

When under Harshad Mehta’s trading in the Associated Cement Company (ACC) increased the company’s share in the market massively, he was seen as a star! Also, Harshad Mehta’s justification of such growth and his so-called ‘replacement cost theory’ made the world name his “The Big Bull”.

What are the Luxurious Items Owned by Harshad Mehta?

Harshad Mehta lived in a 15,000 square feet sea-facing penthouse in Worli which had a mini golf course, swimming pool, and his personal garage. He also has a selection of luxury cars such as Toyota Corolla, Lexus LS400, and Toyota Sera.

How Many Criminal Charges Were There Against Harshad Mehta?

27 criminal charges were brought against Harshad Mehta, out of which he was convicted of four.

When did Harshad Mehta Die?

Harshad Mehta passed away on December 31, 2001, in Thane, Maharashtra.

How did Harshad Mehta Die?

Harshad Mehta died of a sudden heart attack at the age of 47.

How Long Was Harshad Mehta Imprisoned for?

Harshad Mehta’s Journey over the Years –

Named ‘The Big Bull’ by media.

1991       – Securities fraud using the banks got exposed through a report in The Times of India by journalist Sucheta Dalal.

Harshad Mehta used to squash out huge sums from several banks and invested the amounts in the share market. His so-called ‘reason’ for borrowing the money was that he will provide greater interest and buying securities from different banks. At that time, banks were required to buy securities through brokers, and Mehta very cleverly used this for his gain. By pumping up the share values of big companies like ACC, Videocon, Sterlite Industries, Mehta got the money he wished for. His master plan resulted in ACC share to hike up from Rupees 200/share to around rupees 9000/share within three months!

The seller of securities used to hand over a BR to the buyer as proof of their deal. The BR was actually a bill or receipt issued by the selling bank. Harshad Mehta’s plan was to get his hands on fake BRs issued by banks that were not backed by any kind of government securities. With these fake BRs, Mehta collected money from other banks making them believe he is to use the loaned sum for government securities.

With this, Harshad Mehta kept on controlling the stock market. The moment he would sell his shares the whole market would crash as Mehta was the one to book the profits in the end!

While forming a ready-forward deal between two banks, Mehta as the broker would handle all the funding-oriented works. And most of the time the two parties would not even know who they are dealing with as it is the broker who is managing the whole thing. The major thing was that the brokers pretended to be managing the transactions on behalf of banks to maintain legality.

Now, Harshad Mehta created fake BRs so he could gather unsecured loans from various banks. He used small banks to issue them so the whole thing wouldn’t come under the radar. After getting the money in hand, Mehta invested in the stock market to hike the stock prices. The endgame was selling his shares for huge profits and return the loaned money to the bank. By that time the fake BRs were retired in the eyes of the bank.

With Sucheta Dalal’s article in The Times of India on April 23, 1992, Harshad Mehta’s whole tricks got exposed. By that time, the banking system had been conned again and again by Harshad Mehta and the money involved was around rupees 40 billion. Reportedly, several big names such as Citibank, Aditya Birla, many politicians, and even the Governor of RBI S. Venkatraman had all played a role knowingly o unknowingly in Mehta’s historic scam.

Harshad Mehta in the Pop Culture

Cause of Death: Heart Attack

Reportedly, if Harshad Mehta were not exposed and continued with his scams, he would have been richer than Mukesh Ambani! In 1992, before his frauds got exposed, Harshad Mehta paid income tax of an amount of Rs 24 Cr.

This above all information is about Harshad Mehta Biography, Scam 1992.  To read more articles like this follow www.gujaratcelebs.com

I have experience of 6 years in a content writing of many talents, whether it's providing a long-term blog or articles content, social media, biography, or writing website/advertising copy. My attention to detail is excellent and on-time work and my grammar and vocabulary are impeccable. I particularly enjoy jobs that require a high level of accuracy and focus, as well as jobs that allow me to use my writing skills to their full extent. I have written about dozens of topics and am a quick learner on new areas of focus.
Previous BHUPENDRA PATEL BIOGRAPHY | AGE | WIFE | EDUCATION | PERSONAL LIFE | FAMILY |NET WORTH
Next AKSHAY KUMAR IS BACK WITH A BANG & BELL BOTTOM CANNOT BE IGNORED!