For ages, Bollywood has set a standard for songs that have been the finest example of soulful lyrics, soothing melodies, and a bunch of exquisite vocalists. Songsters who have enchanted their spectators with their magical voice, we will witness one of these vocalists, Jahnvi Shrimankar who gifted a bunch of songs and make Gujarat proud with her shine.

To read more biographies of Gujarati stars go to www.gujaratcelebs.com

Jahnvi Shrimankar was born in New Delhi.  Jahnvi Shrimankar originally belongs to a Gujarati family. From her early childhood, she had an immense fondness for music and at the age of only seven, she started her musical journey. Jahnvi primarily sings for Bollywood movies and music albums. This talented songster has been trained under music legends such as Shri Purshottam Upadhyay and Smt. Kaumudi Munshi.

Jahnvi has that power to set the stage absolutely on fire with her voice. In her career, she has done many successful stage shows and continuing. As a singer, she even shared the stage with another eminent singer Parthiv Gohil. 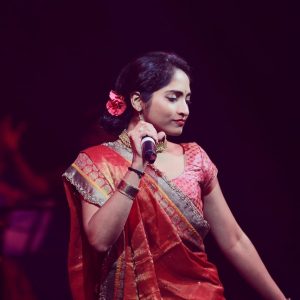 Besides singing for Bollywood films she is a regular singer who often sings for numerous Television serials, Jingles and radio plays and also sings in Gujarati and Malayalam. Jahnvi has been also featured in popular musical shows such as Ishq Sufiana, Rages to Rock, Navras, Rag Rang, and Kavya Samaroh.

A dream got fulfilled when Jahnvi lend her voice for Alia Bhatt in legendary filmmaker Sanjay Leela Bhansali’s venture Gangubai Khathiawadi. The DHOLIDA won hearts and made the fans groove enthusiastically the moment it was released! Her craze continues to shine brighter in and around Gujarat.

This extraordinary singing sensation often uploads her music videos on a youtube channel. And she has her Facebook Page and Instagram Handle too where she shares a daily glimpse of her life and also shares the updates of her upcoming shows and music projects that she is working on.

Jahnvi has quite proved and established her as a brilliant vocalist so far..with time we hope she will keep us entertained by representing a series of soulful songs.

I have experience of 6 years in a content writing of many talents, whether it's providing a long-term blog or articles content, social media, biography, or writing website/advertising copy. My attention to detail is excellent and on-time work and my grammar and vocabulary are impeccable. I particularly enjoy jobs that require a high level of accuracy and focus, as well as jobs that allow me to use my writing skills to their full extent. I have written about dozens of topics and am a quick learner on new areas of focus.
Previous Mahima Makwana Biography | Age | Early Life | Husband | Career | Family
Next Abhishek Jain Biography | Film Director | Producer | Family