Today we are introducing the Garba Queen of Gujarat, Kairavi Buch biography who is no lesser than a powerhouse of performance and is gracefully able to make her audiences enchanted with her magical voice and self-created mashups.

Talking about the Dhollywood industry and especially when it comes to the songs of Gujarat, Garba is the most famous genre of music that slays the world as well as make the audiences dancing with the beats. 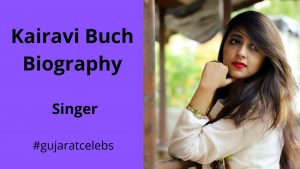 Kairavi Buch is a singer, especially known for her Garba performance, and comes from a Gujarati family. The personal background and the details of the family of Kairavi are not known. A surprising lesser-known fact about this singer is besides being a singer, she is also a dentist.

Why Kairavi is the new internet sensation and titled Garba Queen Of Gujarat?

Kairavi with her exquisite beauty and melodious voice slays the internet every time and is a darling singer for this young generation. She has a wonderful ability to make an extraordinary fuse of Gujarati old classics with new songs. Thus her created music pieces always engage the young generation to have a better understanding of old classic and new modern songs.

Yes, it’s surprising yet you heard it right! This music sensation is proudly holding the Guinness world record for the largest number of players dancing at one place at a time. As Kairavi is the voice of the world-famous united way of Baroda Garba, a place where Navratri festival is celebrated gloriously in its traditional way, she made it possible to make 75000 players dancing to her tune.

The answer is yes. This singing gem of Gujarat is making the world-shaking its legs with her tune. She has been performing for the Indian diaspora in Australia, New Zealand, Canada, UK, and the USA. Besides, Kairavi is one of the most wanted singers in any Gujarati music concert and made more than 500 live shows so far. Her live shows are broadcasted by colors TV.

Apart from doing live shows and performing in various countries she also runs a youtube channel named ‘Folk studio by Kairavi Buch’ which gained massive popularity within a short period.

What are the most famous songs of Kairavi Buch?

Kairavi’s latest release named ‘Hove Hove Mashup’ which is originally a Gujarati Garba Rap Mashup is a huge success and has already gone viral. Some of her most popular songs are ‘Kana Mane Dwarika Dekhad’, ‘Kesariyo’, ‘Taro Maro Sath’ and the list goes on…

Check the website or book through an agency by submitting an inquiry form. Thus you will get all the availability and the price quote for Kairavi’s events.

I have experience of 6 years in a content writing of many talents, whether it's providing a long-term blog or articles content, social media, biography, or writing website/advertising copy. My attention to detail is excellent and on-time work and my grammar and vocabulary are impeccable. I particularly enjoy jobs that require a high level of accuracy and focus, as well as jobs that allow me to use my writing skills to their full extent. I have written about dozens of topics and am a quick learner on new areas of focus.
Previous List of Top 15 Courses after 12th – 2021 – 22 – Gujarat celebs
Next Top 10 Best Biography Books | Best Biography Books in Hindi