Remember Rachna from Sapne Suhane Ladakpan Ke? The cute dimple girl who has been slaying as a T.V. actress for years and winning the hearts of her spectators with her radiant smile and brilliant acting skills is none other than Mahima Makwana.

Mahima Makwana was born on 5th August of 1999 and currently is 22 years old (as of 2021), in Mumbai, India. Originally she belongs to a Gujarati family. Mahima lost her father who was a construction worker when she was just a little girl of 5 years old. Since then her mother who was formerly known as a social worker brought up Mahima and her elder brother. She first had her schooling in Mary Immaculate Girls’ High School. In 2019 she got herself enrolled for Bachelor’s Degree in Mass Media from Thakur College of Science and Commerce, Mumbai.

Mahima commenced her acting career with few commercials when she was only 10. And after auditioning several times she debuted in Colors TV’s soap opera Mohe Rang De. In 2009 she won her spectators’ hearts with the role of Gudiya AKA Gauri in the popular show named Balika Badhu, aired on Colors TV. In between 2009-11 she played many roles in CID, Jhansi Ki Rani, Miley Jab Hum Tum, and so on… ( Mahima Makwana Biography) 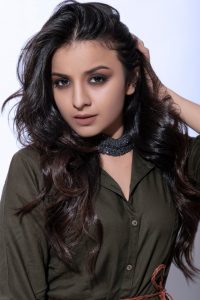 Success and fame brought in Mahima’s life with…

In 2011 it was the lead role in Sawaare Sabke Sapne Preeto, aired on Imagine TV, that helped her to attracts the television companies as she next got the role of Rachna in Zee TV’s blockbuster serial Sapne Suhane Ladakpan Ke, which proved to be the turning point of her career. Later she played as a lead for two TV serials, Dil Ki Baatein Dil Hi Jaane and Adhuri Kahani Hamari respectively…

In between 2015-19, she played so many characters successfully for several TV shows. In an interview, Mahima said it was not easy to reach there as she had to participate in more than 500 auditions before she got her lead role in Sapne Suhane Ladakpan Ke.

In 2017, Makwana made her film debut with Telegu Film Venkatapuram and also made her digital debut as Chiku with Rangbaaz Season 2 in 2019.

This talented youngster besides TV serials had also taken part in reality shows and music videos. Now Makwana is all set to work with Salman Khan’s upcoming film Antrim: the final truth. We wish this exquisite queen all success in her career.

All the above information is about Mahima Makwana Biography. Hope you enjoyed reading this article. For more articles follow Gujarat celebs.

I have experience of 6 years in a content writing of many talents, whether it's providing a long-term blog or articles content, social media, biography, or writing website/advertising copy. My attention to detail is excellent and on-time work and my grammar and vocabulary are impeccable. I particularly enjoy jobs that require a high level of accuracy and focus, as well as jobs that allow me to use my writing skills to their full extent. I have written about dozens of topics and am a quick learner on new areas of focus.
Previous Paul Marshal Biography | Dancer and Choreographer | Early life | Girl Friend | Latest news
Next Jahnvi Shrimankar Biography | Age | Early career | Husband | Songs