The heartthrob of millions, Dhollywood superstar Malhar Thakar, holds an aura that no one can just not love! Malhar Thakar movies are something that no Gujarati can ever ignore.

His brilliant acting, fabulous screen presence along with his charming personality has been winning hearts for several years now. 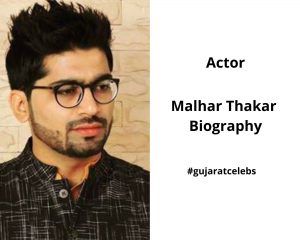 If you are a fan of Malhar and looking for every bit of his life, you are at the right site. Here, you will get all the unknown and detailed facts about the Gujarati star actor Malhar Thakar.

When is Malhar Thakar’s birthday?

Where was Malhar Thakar born?

The birthplace of Malhar Thakar is Siddpur, Gujarat.

How old is Malhar Thakar?

Where did Malhar Thakar complete his schooling from?

Does Malhar Thakar act in theatre?

Malhar Thakar movies are superhits at present. But the lesser-known fact is that Malhar Thakar began his acting career with theatre. He acted in several theatres while starting his journey. After nine years of working in theatres, Malhar finally got to act in movies.

What was the debut movie of Malhar Thakker?

Malhar Thakar made his debut in the Gujarati cinema with Chhello Divas in 2015. The movie was a hit and was loved immensely by the audience.

Has Malhar Thakar worked in any web series?

What are the music videos Malhar Thakar has starred in?

Which is the Malhar Thakar new Gujarati movie?

Recently, Malhar’s new movie Dhuandhaar has released in theatres. It is a crime thriller written and directed by Rehan Chaudhary. Malhar Thakar has shared the screen with several talented actors such as Hiten Kumar, Alisha Prajapati, Netri Trivedi, and Dimple Biscuitwala. Also, Dhuandhaar is one of the finest of all Malhar Thakar movies.

Does Malhar Thakar own a production house?

Where is Malhar Thakar’s NGO?

Malhar Thakar’s NGO is in Gujarat. During the pandemic in 2020, he decided to establish an NGO to aid the people who are badly affected by Covid-19.

What are the upcoming projects of Malhar Thakar?

The movies Vickida No Varghodo and Sara Bhai are ready to be released as the filming is already done. Only are the post-production works are being handled at present. currently, Malhar is shooting for both Kesaria and Locha Lapsi.’

Over the years, Malhar Thakar has worked in many movies. While Chello Divas in 2015 was officially Malhar’s debut cinema, in 2012, Mlahar worked as a side character in the film called Kevi Rite Jaish.

Love Ni Bhavai (this movie has been praised by critics and gained a lot of commercial success. Moreover, it ran for more than 3 months in the theatres)

After this year, Malhar Thakar movies became a kind of ritual for Gujarati cinema lovers. He also made an appearance in the Midnights with Menka show.

2021:  Swagatam (Swagatam Gujarati movie was released on the OTT platform ShemarooMe as the movie theatres were closed at the time due to pandemic.

Even though it came out on the OTT audience, specially Malhar’s fans showered the movie with endless love)

Dhuandhaar (this is Malhar Thakar latest movie released on September 17, 2021)

What is Malhar Thakar’s height?

No, Malhar Thakar is not married.

What is Malhar Thakar’s hobby?

According to reports, Malhar Thakar loves to read poetry in his free time.

Which religion does Malhar Thakar belong to?

Malhar Thakar was born in a Hindu family.

Where does Malhar Thakar live?

Who is Malhar Thakar’s favorite sportsperson?

Who is Malhar Thakar’s girlfriend?

As of now, no name has been found to be dating the popular star. But, Malhar made it to the news when he proposed Bollywood diva Prineeti Chopra in an Instagram post in 2019.

Every Gujarati movie Malhar Thakar stars in becomes a hit! And that is what he has done and contributed to the Gujarati movie industry. Malhar Thakar’s unyielding presence and exceptional persona have been making the fans swoon over him for several years now. And the way he has kept on releasing more and more amazing projects, we are sure, this love is not going to fade at all!

I have experience of 6 years in a content writing of many talents, whether it's providing a long-term blog or articles content, social media, biography, or writing website/advertising copy. My attention to detail is excellent and on-time work and my grammar and vocabulary are impeccable. I particularly enjoy jobs that require a high level of accuracy and focus, as well as jobs that allow me to use my writing skills to their full extent. I have written about dozens of topics and am a quick learner on new areas of focus.
Previous Top 10 Best Biography Books | Best Biography Books in Hindi
Next Chetan Bhagat Books | Five Point Someone | One Arranged Murders Book | The 3 Mistakes Of My Life | 400 Days