Lord Shiva Temple and one of the Jyotirlingas is located between the route from Dwarka city to Beyt Dwarka Island on the coast of Saurashtra in Gujarat.

The temple is very well decorated. It is one of the 12 jyotirlingas of the world. A 25m tall statue of Lord Shiva is present there. The idol of Shiva is in a sitting posture. A very beautiful garden and a pond are also there. The place is very calm and quiet.

According to the sacred book Shiv Mahapurana, Brahma is the creator and Vishnu is the preserver. Once they took up a fight about who is the most powerful or supreme. And then Lord Shiva appeared and made a hole in the Earth and passed an immeasurable ray of light. Vishnu and Brahma both decided to measure both the ends. 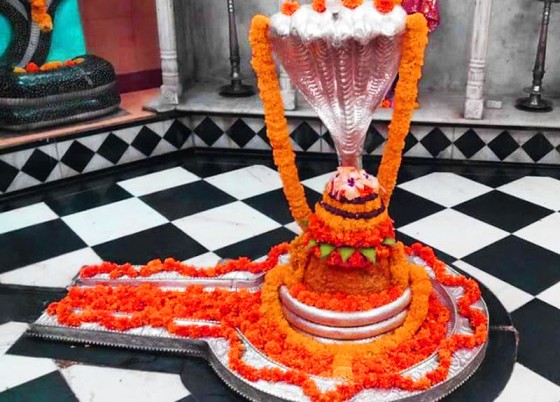 So, Brahma decided to go upward and Vishnu to go downward. But Brahma could find the starting point at the top but Vishnu admitted that he could not find the base, So Lord Shiva reappeared as a Jyothirlinga, and cursed Brahma for telling a lie and told him that he will have no place in ceremonies, and blessed Vishnu for accepting the truth and told he will be worshipped till everyone dies in this Earth.

There are a lot of stories about this place. According to a great man named “Balakhilyas”, there was a group of dwarf sages or pandits. They used to worship Lord Shiva. To test their devotion towards Lord Shiva and their patience, Shiva decided to come in a nude state. When he appeared in front of everyone by not wearing anything, all the wives of the sages went behind the nude person, as they got attracted towards him.

So being jealous in a state of anger they cursed him that he should lose his Linga. And as soon as Lord Shivas Linga fell into the Earth the whole Earth started trembling. Everyone got very scared that the Earth will get destroyed so Lord Vishnu and Lord Brahma came to Lord Shiva in order to make him calm. They requested him to take back his Linga and stop the shaking of the Earth. Impressed by their devotion he promised to stay in Darukavana as “Jyotirlinga” forever.

Another story that is mentioned in Shiv Purana is that Nageshwar Jyotirlinga is the story of a demon whose name was Daruk. Daruk with his fellow demons used to kidnap people and keep in the forest and torture them, steal things, etc. And the wife of the Demon Daruk was Daruka, the demoness, who was a very big worshipper of Mata Parvati, so impressed by her power Mata Parvati has given her powers and named the forest, where they resided as “Darukavana”. Where ever she used to go the forest used to follow.

So, in order to save the demons from the punishment of Gods, Daruka used all her powers and shifted the forest under the Sea, and there they continued their bad deeds like kidnapping. One day they kidnapped a girl named “Supriya” who was a devotee of Lord Shiva. When they took her and kept her under the Sea, she convinced all the other prisoners to call Lord Shiva, and hearing their prayers Lord Shiva came to rescue them and all the demons ran away. Then Lord Shiva announced that he would show correct paths to them who will worship him. Lord Shiva is considered to be the most powerful of all.

Nageshwar jyotirlinga is not very far from Dwarka. It is one of the best places in the city of Gujrat, people come here to take the blessings of Lord Shiva here. As it is one of the most ancient temples and considered to be a very powerful place. So, in order to reach the divine place and visit the Lord Shiva’s temple, one can take any road transport from Dwarka, as it is 15km away, or can directly come to Veraval station and then take a rickshaw to visit the temple.

I have experience of 6 years in a content writing of many talents, whether it's providing a long-term blog or articles content, social media, biography, or writing website/advertising copy. My attention to detail is excellent and on-time work and my grammar and vocabulary are impeccable. I particularly enjoy jobs that require a high level of accuracy and focus, as well as jobs that allow me to use my writing skills to their full extent. I have written about dozens of topics and am a quick learner on new areas of focus.
Previous Punit J. Pathak Biography | Early Life | Journey | Wife | Career
Next Ratan Tata Biography | Life-Wife | Net Worth | Business | Philanthropy