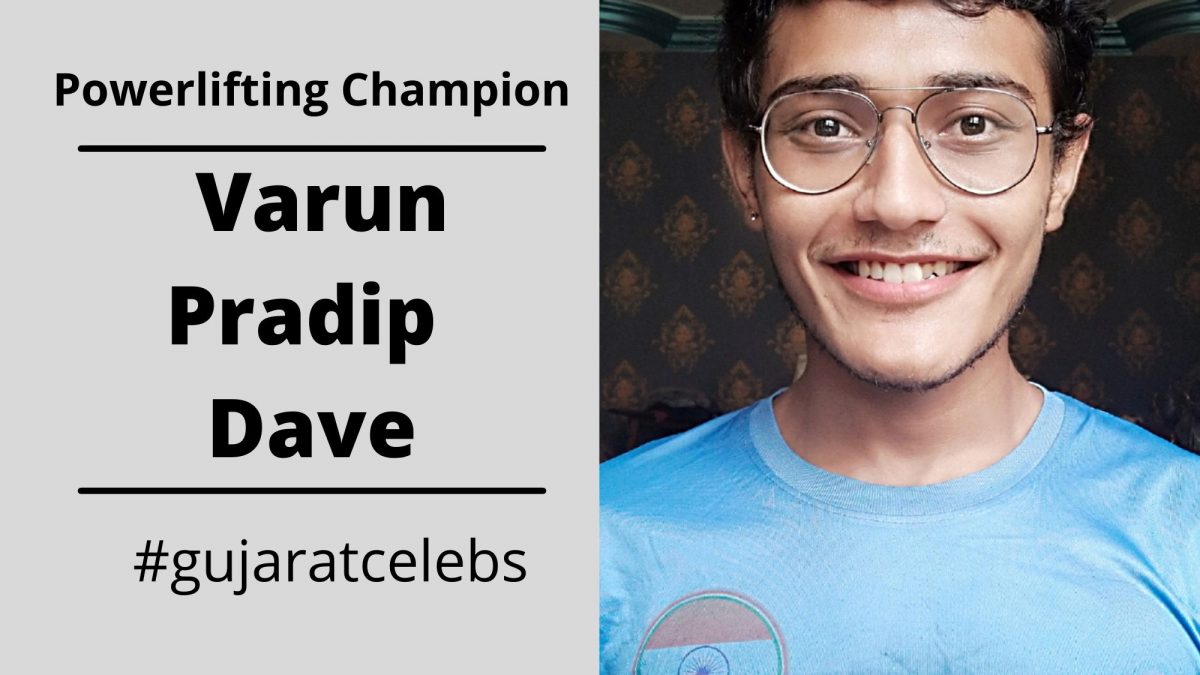 Varun Pradip Dave, the youngest person to hold the title of “Strongest Man of Gujarat”, two-times World Champions winner. His engaging success story will surely blow your mind. The charming young man bagged 5 National Championships and 8 State Championships. With no family background in sports, Varun had to fight to reach where he is today. His journey started by seeing his sister playing Judo. Now, as she eases in the National level tournaments, Varun has taken up Powerlifting at the international level.

“It was very tough for me as I had no family background in sports. I had to struggle for 4-5 years before I could receive the recognition I deserved. In India, both the government and people highlight only cricket. The other sports are not given that much concern or standard.”

So, how did you form an interest in the sport?

“I was always interested in sports. And I had this dream to represent India as a sportsman. When I was in 10th, my sister started training for Judo. She used to go for tournaments but I couldn’t form that kind of passion in it. After seeing her training sessions, the competitions, I thought I could go for it too. Although I was loving only the process of that. then I formed an interest in powerlifting and went for it.”

Tell us something about your (Varun Dave’s) schooling and education

“I studied in St. Xavier’s. I have just completed my diploma in civil engineering. Now I am studying for a bachelor of that. In St. Xavier’s, the students could choose which sports they want to play. But due to my short height, they weren’t giving me a chance. So I didn’t get much support from there.

“So when I started, at first, I faced lots of difficulties. I didn’t have the guidance. After about 2 years when I started getting noticed some people again started questioning my capabilities as I was new to the field and went this far so easily and all. But in the end, everyone got to know who won, and what I had in myself.”

How many medals do you hold?

“I have won around 16 to 17 medals including the Nationals, States and International Championships.” 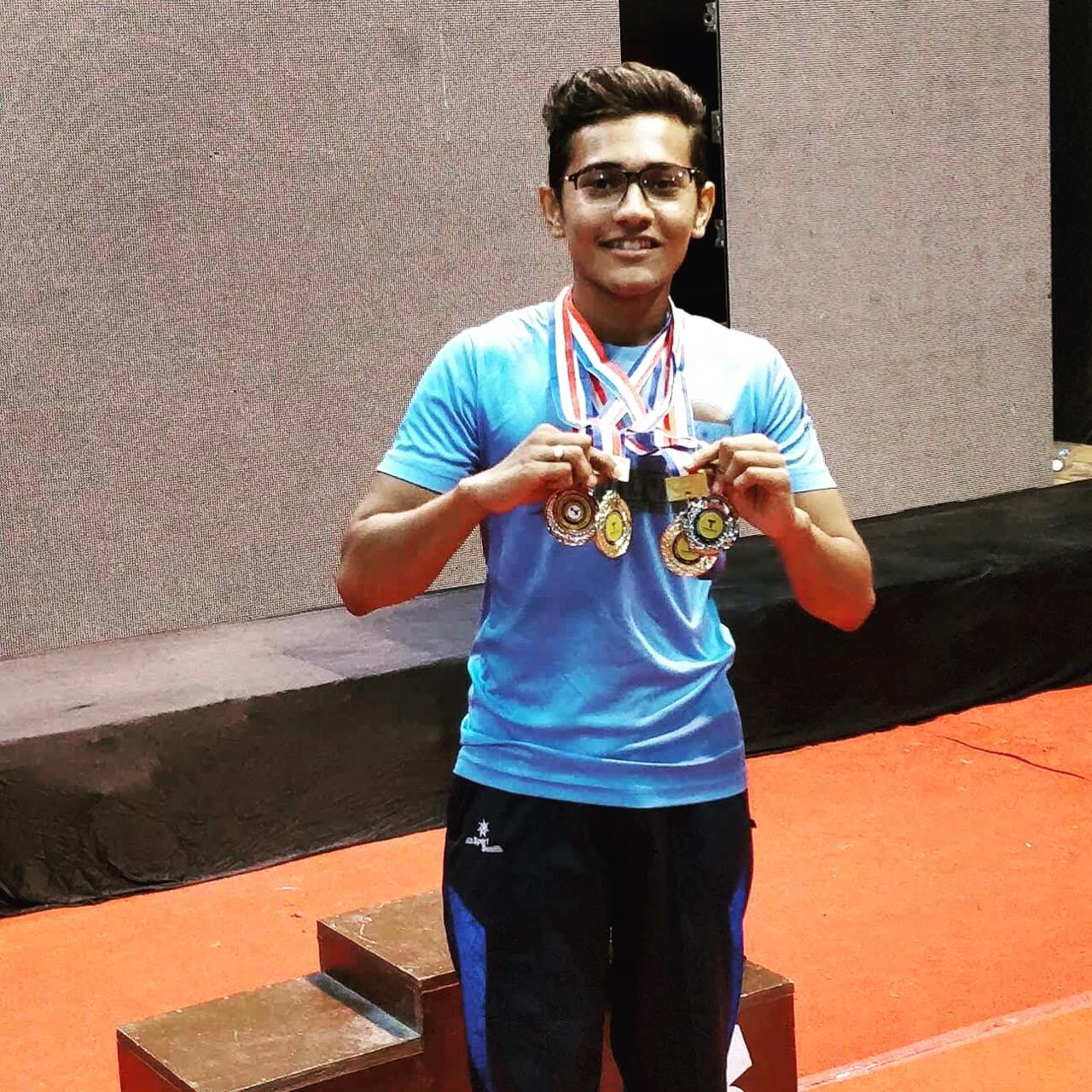 How was your lockdown?

“It was pretty much boring as I am a person who likes traveling around for competitions and tournaments. I spend 7 to 8 months a year on it. Now there are no tournaments or anything. But I have focused on my fitness during the time and trained more and more.”

How do you feel about the love you receive?

“It has always been my dream and I am really living my dream. At first, I had been criticized for my height. I even faced ragging in school because of this. I wasn’t very good at studies. The people who did that came to the front to criticize me this time. I motivated myself to leave it behind and be positive. I read somewhere that when you achieve success all your haters will start seeing light in you. Now the ones who criticized me the most have turned friends.”

Who is your Inspiration for Power Lifting

“I would say, MS Dhoni. From him, I learned that patience is everything. You can lose but have patience and you will get what you are made for. Just keep working hard.”

How do you balance your life& Studies?

“You know what I do! If the semester is of 6 months I play the first 4 months. And during the last 2 months, I start studying.”

The ones that pushed you for achieving this goal

“My parents and sister always supported through everything. When everyone thought I cannot do it, they believed in me. Without them, I couldn’t get to where I am today.”

The incident that made you (Varun Dave) lose hope!

“When I played the Nationals for the first time, I won 3 medals. So I was selected for team India. I was 15 then. They gave me 6 months to train myself. They told me to do whatever you want, but you have to win. During that time, I kept everything aside and totally got into that. I won the gold medal in the world championship.

“After a week the tournament ended, I had my university exams. There I failed in 3 subjects out of 5. Then my family started pushing me for studies and made me leave powerlifting for about 8 months. I didn’t go to the gym. My schedule, training, fitness everything went to the gutter. I became very depressed.”

Varun continues, “After those 8 months when I got back on track, I kept on playing for a year. And I didn’t win for repetitively 4 to 5 tournaments. Then I started thinking about how I am ever going to recover. But I believed that we never lose it completely until we lose ourselves. It was like, after winning the world cup, I was getting out of the field in the first ball in IPL. That is what was happening to me. The newcomers were beating me in the boys’ championships. Sometimes they would come and ask me for a picture then post on social media saying, “We defeated the international champion”. After seeing those, I thought this is why you guys came to me!

“As much as I learned at that phase, I also got a lot of criticism. People started saying I won because of sheer luck and nothing.”

Tell us something about your (Varun Dave’s) workout sessions

“I opt for 100 kilos. But when I cannot do that, I do 45 minutes of cardio. Because I know that no matches are going to be there right now, so I maintain a different strategy. I am doing my learning sessions now. And I started getting the benefits.”

What are Varun’s Dreams for the future?

“I played in the 2017 world championship that was held in India; I was 15 then. I was the youngest then and the oldest player was around 35 years old. And I played as a player from team India, not in the under 17 or under 19 categories. I participated with a lot of sportsmen who had about 20 years of experience. So, this time also I want to succeed.”

“All I can say is when you come for weight lifting, whatever you do in the gym, the pieces of training are all the same, but the technique is different. How to increase the lifting weights follow a totally different technique. There are the deadlift and bench-press. These follow some techniques that you need to master. You need to give it time, and lots of it. This field is something that you cannot gain success suddenly. You have put in hard work, time and determination. Like, my bench-press took 4 years to reach from 40 kg to 80 kg. And I started deadlifts with 75 -80 kg. Now it is 18 kg. It depends on your power.

What does Varun have to say about India’s ignorance of sports?

“I don’t want to say it negatively, but India does not support these sports as much as the other countries. If it did, India would have reached another level. The talents this nation has, I guarantee, no other nation has that. Indians word harder. I feel really bad when people who I idolized say that they will not play right now and focus on training to earn fundings. They leave the field because of lack of importance the government gives to sports.”

How much support do the sportsmen receive from the government?

“We don’t really get much support. You need it to do it all yourselves. But after you win for consecutively 3 to 4 years, the central government offers jobs. It has started recently though. Before nothing was there for people like us. And there are few awards that are given if you have won several times in the last 3 or more years. These things have started recently.”

“The thing is when I am playing I have to give up the normal life that everyone leads. Even one day of cheat day can hamper a lot of things. For the last four years, I haven’t taken a single cheat day. Every evening from 7 to 10 I am in the gym.”

After his coach, Varun is the first person to win the title of “Strongest Man of Gujarat” for lifting 180 kg while being 53 kg. He gladly says, “Even I received the trophy from my coach’s hand. It was really a proud moment. Not only in my category, but I also stood at first in all categories. It is like being the “Man of the Series.”

“No state championships are going to be held now. But Asian Championship is in June, and World Championship is in December. The process for entries is still being talked about as both the tournaments are out of India and we are facing a lot of visa issues because of Covid.”

Varun on training other boys

“There are 3 boys who wanted to play powerlifting. They had no background like myself. So I told them to join me at my training. All of them now play in State and National championship and gold medals. I feel really proud that I could support them and I am a part of their achievement.”

How did you (Varun Dave) reach Tedx?

“At first I was trying from my side but it didn’t work. But after a few years, they approached me. So I took the opportunity. Generally, people with over 10 years of experience achieve what I have achieved by the age of 18. So they wanted me to motivate the youth. It makes a difference when a 35 or 40 years old address the youth and when a person who is 18, does that. That’s how got the chance.”

Facts and favorites of Varun Dave

Hobby – Acting (he says, “it is my dream, you can say. I am also pursuing it, and trying for it. Though I am not sure, there’s no harm in trying.)

How many interviews has he given – 8 to 9

“Your body is what is going to support you for a lifetime if you invest in it properly. You can have all the money in the world but if your body isn’t fit, those things are of no importance. So whichever sports you are interested in making sure your body gets the benefit. Make sure to keep yourself fit.”

What Varun has to say for team Gujarat Celebs?

“I really liked the page when I went through it. You guys are supporting a lot of personalities who were not getting the recognition they deserved. I am thankful for it. It makes me happy that people are getting to know us through the page.”