Rutvi Pandya: An Exclusive Interview With The Queen of Voice & Gujarati Singer

In this article, we will share with you the queen of voice Rutvi Pandya’s Biography as well as the Interview.

In Conversation with the singer having melodious voice Rutvi Pandya

The sensational Rutvi Pandya is undeniably one of the most famous rising stars in Gujarat. Her melodious voice makes everyone sway. Her music soothes the musical atmosphere in no time. GujaratCelebs got a few moments to know more about the outstanding star’s journey to stardom. Let’s be acquainted with it from the lady herself. 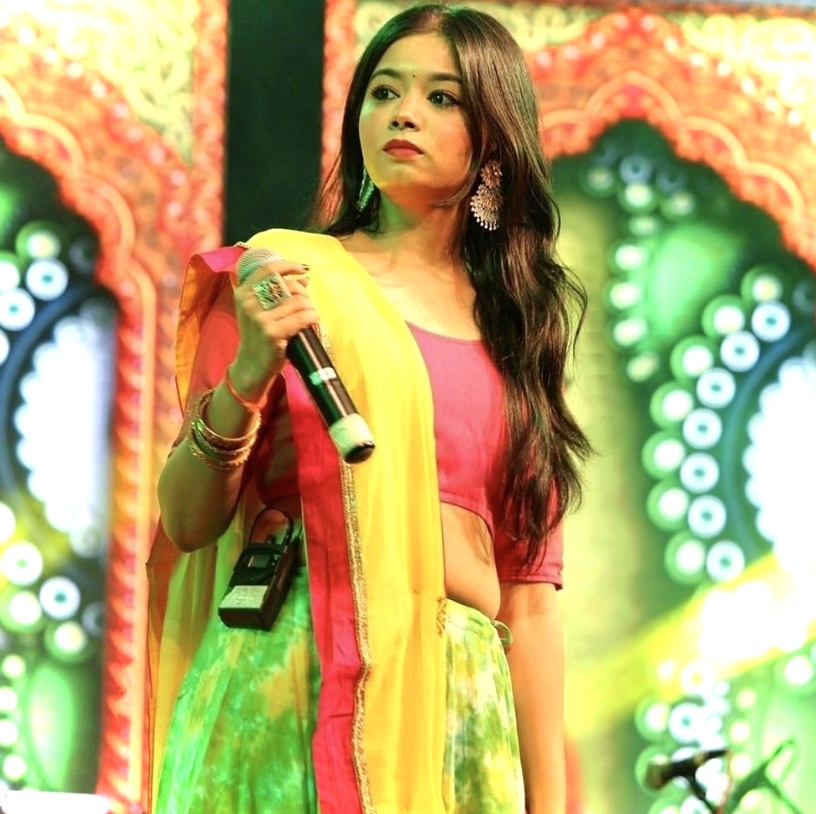 Talking about her childhood, Rutvi says, “Actually my father is also a singer. So, since childhood, whenever I saw him on stage singing his heart out I dreamt to reach there at some point. I was 2 to 3 years old when I started talking, and it was at that time when I used to sing also. Whenever I went to see him perform, the next morning I would make my parents listen to me singing the songs my father sang. That’s how I began learning.”

“In school, teachers and students all knew that I sing well. So in assemblies and all I got to sing. There was a group and I used to be the leader. It felt really good. I enjoyed a lot as I always wanted to be a singer.”

If she wanted to opt for any other career

“My aim had always been to become a singer. At first, I had no idea about concerts like the ones we are used to seeing now. The first-ever concert I attended was by Neha Kakkar. It was held in Ahmedabad. I was in middle school at that time. I was so moved after watching it. It was then I decided what I want.”

Favorite genre of music that Rutvi loves to sing

“I like Bollywood the most. Being a Gujarati, I definitely love singing Garba but Bollywood is my favorite.”

“I love many Garba songs. Because ‘EkZaadMatheZhumakdu’ has become such a hit, it has become special to me. I love ‘Fagan ForamtoAayo’ too. It is also from my album ‘Rang Lagyo’.”

“I am working for a new album. It is a Gujarati. I cannot reveal more but we are starting the shoot tomorrow. I am very excited about it.”

Any artist who inspired her to become what Rutvi is today

“As I said already when I went to Neha Kakkar’s concert, not many people knew her at that time. She was a rising star. ‘Sunny Sunny’ released a few days before the time. Seeing her made my dream more real. And I used to watch the performances of Sunidhi Chauhan also. Watching them sing on stage inspired me so much that I kind of made it clear in my head that I will work my best to reach there. And my family environment too always circled around music so it helped me a lot.”

How does she feel about having such fame at a very young age?

“It feels really good when you are praised for your voice. I get so much respect from people, from my fans, I feel truly overwhelmed.”

What does Rutvi say about the love of her fans?

“There are many fan pages on social media these days. On Instagram and everywhere else, they love me so much. My fans are really very sweet. I try to make them happy too so they can feel I’m worth trending and reply to them as much as I can. I want to thank all of them for making me trend on the platforms.”

“Touchwood I’m being offered so many songs. They are releasing and people are liking them very much. But, I wish someday, I get to sing in Bollywood as a playback singer. You can say it is an aim.”

“It’s definitely Arijit Singh. He is everyone’s favorite. Mine too. This is a dream to sing with him one day.”

Achievements as a singer

How does she balance personal and professional life?

“There is nothing such as balance right now. I work most of the time. I enjoy working so it is not like I have to take time out separately. In between shoots, I get enough time for myself. So I don’t need to balance.”

How does Rutvi Pandya feel receiving success in her 20s?

“It’s not like that. Sometimes I feel if I could get what I have now when I was seventeen or eighteen, then I would have achieved much more by now. Of course, I am grateful for all the love I get. Still, I want to grow much much more.”

“I have achieved a lot within that period. What I have now, I did not have it before lockdown. Before people knew my name but did not know me well. But now whenever I go out people recognize me and ask for photos. Recently I went to a mall and some people came running to me saying “Ma’am don’t take off your mask. People are watching you”. But it feels good that people are recognizing me. They listen to my music.”

She continues, “Recently I had a performance in Kumbhalgarh, Rajasthan. There I went to a restaurant and at a table next to mine, around ten people were seating there. All of a sudden they started singing ‘EkZaadMatheZhumakdu’. I thought they were joking or something but later, they asked me if I am the same Rutvi. It was surprising how people outside Gujarat listen to my songs and like it.”

The album ‘Rang Lagyo’ got released in 2020. It was launched on YouTube. The album became an instant hit. It is compiled with many Garba songs.

Rutvi’s message for her fans

“Touchwood, all my recent songs have earned immense love. I hope I keep getting this love in the future and they continue loving me. Also, I wish their love fulfills my dream to reach Bollywood one day. So all I can say is, like always, keep loving me. And I love you all.”

What Rutvi has to say for us, team Gujarat Celebs!

“It felt so good talking to you. I really enjoyed it. Thank you so much for spending time with me. Hope you all keep showering my love like this.”

At our request, Rutvi has sung a few lines from some of her favorite songs. She hummed ‘EkZaadMatheZhumakdu,’ which we all know is a heart-warming melody. Rutvi also sang her current favorite Punjabi number Afsana Khan’s ‘Titian’. She sang two lines of her all-time favorite Arijit Singh’s ‘Aayat’.

Rutvi Pandya’s humbleness is such a pleasuring sight. She has the aura to get all her fans’ affection. Her music is so melodious that all of them are cherished by thousands of listeners. Numerous fan pages on multiple social media platforms are dedicated to Rutvi. All her posts earn enormous love.

I have experience of 6 years in a content writing of many talents, whether it's providing a long-term blog or articles content, social media, biography, or writing website/advertising copy. My attention to detail is excellent and on-time work and my grammar and vocabulary are impeccable. I particularly enjoy jobs that require a high level of accuracy and focus, as well as jobs that allow me to use my writing skills to their full extent. I have written about dozens of topics and am a quick learner on new areas of focus.
Previous Girnar Hills, Location, How to reach, Best time to Visit – Gujaratcelebs
Next Hemant Kher : An Exclusive Interview With Web Series ‘Scam 1992’ Actor