Today in this article, we introduce you to the power pack couple Samir & Arsh Tanna Choreographer, their awards & Performances 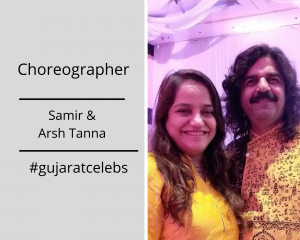 There is a big list of power couples in Bollywood who are shining not only on screen but behind off-screen as well. In this story, we will witness the brilliant journey of Bollywood power couple, Samir and Arsh Tanna, the eminent dance choreographers who are always ready to make Bollywood stars dancing with their wonderful moves.

Let’s sneak at the journey of this couple so far…

Samir Tanna belongs to a  Gujarati family that had a strong background in dance and drama. His father, Anirudh Tanna had an academy named ‘Parevadu’, which later changed to the name of ‘Kalanirjhari‘ and is currently run by this couple, where Anirudh trained little children in dance and drama. It is no wonder that Samir also started learning techniques from his father at the age of only six.

In 1987, Samir’s father’s academy was invited by the Russian Government to present their magnificent shows. After two years, Arsh who also happens to be a trained Kathak dancer joined their academy. In 1988 Arsh and Samir were both invited to perform a show by the US Government. 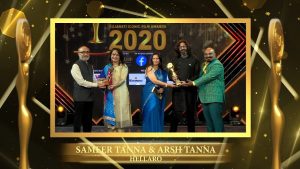 This made for each other Jodi got hitched in 1992 and currently have two daughters. Just like his parents, their elder daughter Tamanna is fond of Oddisi dance and has been training under Daksha Maheshwariwalla. While their younger daughter, Tarana is also learning Kathak dance and shares her interest both in dance and drama.

For Sameer Tanna, It all started with grabbing the National Award for choreographing the famous dance number Dholi Taro Dhol Baje from Hum Dil De Chuke Sanam, directed by Sanjay Leela Banshali.  And as a couple, they again showcased their talent for the second time in Banshali’s film Ram-Leela for the majestic song Nagada sang Dhol Bajey, where the couple choreographed Deepika and Ranveer both.  And  Samir also choreographed Ranveer for the song Lahu Muh Laag Gaya in the same movie and they won the Filmfare Awards 2014 as the Best Choreographer.

They have also choreographed films like Hanana, Hum Ko Tumse Pyaar Hain, and Guru Mahaguru and won several prestigious awards. This couple is more into world shows and choreographs for marriage ceremonies as well.

Now this duo is working with their current project Tumhari Pankhi, a daily soap opera that will be aired soon on the Life ok channel.  We wish this choreographer duo to be seen in Bollywood more in future days.

I have experience of 6 years in a content writing of many talents, whether it's providing a long-term blog or articles content, social media, biography, or writing website/advertising copy. My attention to detail is excellent and on-time work and my grammar and vocabulary are impeccable. I particularly enjoy jobs that require a high level of accuracy and focus, as well as jobs that allow me to use my writing skills to their full extent. I have written about dozens of topics and am a quick learner on new areas of focus.
Previous C. R. Patil Biography | Family | BJP Politician | Age | Net Worth
Next Paul Marshal Biography | Dancer and Choreographer | Early life | Girl Friend | Latest news