Santvani Trivedi Biography: While talking about Indian music, the industry is always star-studded with gigantic names who have been ruling the ground from time to time. But nowadays not music industries are not only centering around those big names but also they have stars who started their journey from the ground. 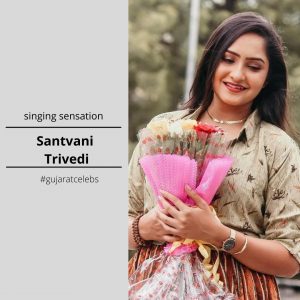 Talent, diligence, and patience were the factors that helped these youngsters to reach for the sky while keep themselves grounded. Santvani Trivedi is one of these youngsters who with her exquisite voice and diligence proved herself with time and became one of the major among these fresh talents.

Belonging from an ordinary Gujarati family to becoming a distinguished singer… let’s be a part of santvani’s journey.

Santvani Trivedi was born in Godhra, Panchamahal, Gujarat on 15th July 1995. Since her childhood, santvani has had an immense fondness for music and melodies. Despite her great love for soulful songs of different genres, she decided to complete her studies. She has done her bachelor of science in microbiology. Santvani stated that she always got her parents’ support throughout her journey. And it’s because of her parents she decided to spend more time singing and experimenting with an assortment of genres.

Santvani commenced her musical journey with her channel on youtube. Within few months she achieved a huge number of viewers and subscribers on her channel who got enchanted by her soulful voice and charming appearance.

Santvani Trivedi is one of the youngest singers in the industry. To our surprise, this young singing idol possesses already three musical bands of her own. Those are Rock bands, Classical bands, and Folk bands. Besides these three bands, she also has her own Gujarati songs bands that perform at Garba nights. Santavni is called ‘Garba Queen’ as she gracefully performs garbas and even had shared the stage with another eminent Gujarati vocalist, Parthi Gohil. For her extraordinary spell of entertaining the spectators on Navaratri and Garba nights, she reached the highest peak of fame so early.

All her songs are available on online music platforms like ‘Jiosaavn’ ‘Spotify’ and ‘Wynk’.

In her youtube channel, she has done songs cover of many Bollywood songs that touched millions of souls. Santvani’s first music video cover is “Main Hoon Hero Tera” from the Bollywood movie ‘Hero’ enacted by Salman Khan. This music cover made her so admired among the netizens that Trivedi almost instantly got rapid growth of subscribers on her youtube channel and also has become the first Youtuber in Gujrat who got more than 25K followers on her official Facebook page. Another music cover ‘Jag Ghooeya’ from Salman khan’s movie ‘sultaan’ also got a huge number of likes and views.

Santvani has represented two patriotic songs that are ‘Vande Mataram’ and the Indian National anthem ‘Jana Gana Mana’. For her excellence in music Trivedi has achieved ‘Mahila Gaurav Awards 2020’.

Santvani recently performed in ‘Panchmahotsav’, one of the big events of Gujrat. Due to the pandemic, many of her projects are waiting to be released. We hope this talented songster will not only make proud Gujrat but our whole country.

I have experience of 6 years in a content writing of many talents, whether it's providing a long-term blog or articles content, social media, biography, or writing website/advertising copy. My attention to detail is excellent and on-time work and my grammar and vocabulary are impeccable. I particularly enjoy jobs that require a high level of accuracy and focus, as well as jobs that allow me to use my writing skills to their full extent. I have written about dozens of topics and am a quick learner on new areas of focus.
Previous LET’S GO ON AN AWE-INSPIRING LIFE JOURNEY OF SWETA & WITNESS HOW CRAZILY PASSIONATE SHE IS ABOUT HER CREATIONS.
Next Parthiv Gohil Biography | Early Life | Age | Wife | Songs